Nigeria are looking to hire a foreign goalkeeping coach to help train up a suitable stand-in for the ailing Carl Ikeme, as they prepare for crunch World Cup 2018 qualifiers.

The Super Eagles are flying high at the top of their qualifying group, with a maximum six points from two matches, putting them on course to make next year’s finals in Russia.

But they face tricky back-to-back fixtures against neighbours and long-standing rivals Cameroon on September 1 and 5, and have not been helped by Ikeme’s absence.

The Wolverhampton Wanderers number one, who made his debut against Tanzania in 2015, played a key role in Nigeria’s 2-1 opening victory against Zambia in October last year.

But last month the 31-year-old was diagnosed with acute leukaemia and immediately began treatment.

Chippa United goalkeeper Daniel Akpeyi was widely blamed for the second goal in Nigeria’s 2-0 home defeat to South Africa in the Africa Cup of Nations qualifier in June.

The defeat was Gernot Rohr’s first as Nigeria coach and prompted suggestions that Vincent Enyeama could be persuaded to return to international football after he quit in 2015. 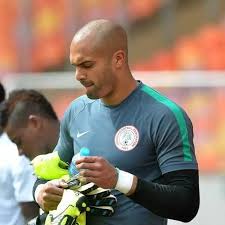 Nigeria Football Federation technical director Bitrus Bewarang said Rohr was “working hard to put together a formidable team that will include a capable replacement for Ikeme”.

“We all know what is at stake and so are leaving nothing to chance,” he added.

Assistant coach Salisu Yusuf said the new goalkeeper coach “will be a welcome addition to the technical team of the Super Eagles”.

Goalkeepers being considered for a greater role in the senior team include Dele Alampasu, of Portuguese side Feirense, Emmanuel Daniel, of South Africa’s Orlando Pirates, and Ikechukwu Ezenwa, from FC Ifeanyi Ubah in Nigeria.

Nigeria’s first qualifier against Cameroon is at home in the southeastern city of Uyo on September 1, with the return clash in Yaounde four days later.

Cameroon currently have two points. Zambia and Algeria each have a point.

GHANA CONTINGENT AT THE WORLD ATHLETICS CHAMPIONSHIP SO FAR