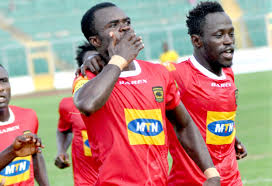 Amos Frimpong, the captain of Kumasi Asante Kotoko has spoken ahead of the big clash against Accra Hearts of Oak on Sunday as he is given a bet by Hearts of Oak players; Patrick Razak and Winfred Cobbinah.

Speaking on Boss FM this morning, the defender confirmed that he and his colleagues are poised for action and ready to put smiles on the faces of the Kotoko fans.

The captain of the Kumasi based club said they have put behind them all the unfortunate incident that occurred about three weeks ago.

“We are now looking ahead to ensure the club gets back to the right rack. We have put behind us all that happened, moreover that would also motivate us to push for the best, life must go on”. Amos explained on Boss Sports in Kumasi.

Challenge from Hearts of Oak players

Amos who has been on national duty with the Black Stars “B” said his colleagues from hearts of Oak, Winfred Cobbinah and Patrick Razak have asked for a bet respectively as to who wins on Sunday.

“My roommate at the national team camp is Razak and he has already given me a bet that Hearts will win on Sunday, but I told him that that will not happen because so far as I am the captain, Hearts can not beat Kotoko in Kumasi”.

“Yesterday, it was Winfred Cobbinah who said I should bet with any amount that Hearts will best Kotoko on Sunday, but I vehemently disagreed and said it will be the other way round” the captain continued.

He then implored on the Kotoko supporters to come in their numbers and support the players.

“The task is a very big one and we alone cannot do it as players, we need the fans to join us and then make us stronger, we are ready to die for them but it will be fantastic to do it together as a big family.” Amos said.

“He went on to affirm that it will be the best to have coach Steven Pollack seated on the bench to give instructions, but if he does not make it to the bench ( because of his injury), it will not affect us much as he can still communicate with those on the bench as to what we should do, nonetheless, we shall give up our best to beat Hearts of Oak, we are fired for victory”. Frimpong explained.