The English Premier bounces back after the FIFA weeks of International football with an epic encounter between Manchester United and Liverpool FC.

The past two weeks have witnessed some good football as players were fighting for their respective countries in order to seek qualification for the FIFA World Cup 2018 in Russia.

Now they return to action for their respective clubs and this is where international club mates become enemies on the field of play.

The English Premier League will witness the fiercest  fixture on their calendar as Manchester United and Liverpool clash at lunch time in Anfield.

German Coach Jurgen Kloop would welcome his old rival Jose Mourinho at the Liverpool home grounds as the two are lucky not to have any of their players missing out due to injuries on International duty. 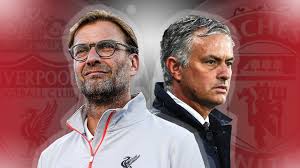 The defence of the Reds is identified as their main weakness and Matip, Lovern and Klavan would need to up their game in order to contain the in form Romelu Lukaku who just can’t stop scoring.

The midfield of Manchester United would be their biggest problem as the absence of Paul Pogba and Maurone Fellani miss out due to injury. Spanish player, Ander Herrera would be called upon to provide that stability in the middle but will not have it easy with Jordan Henderson and Emre Can on the side of Liverpool.

Liverpool would also be depleted in terms of quality upfront as Senegalese Sadio Mane continues to serve his suspension for expulsion when they faced Manchester City. But Phillipe Coutinho should fill in the void very well as his return to action has been remarkable for Liverpool, he is expected to partner Mohammed Salah and fellow countryman Femino upfront.

Manchester United is tipped to win because they have a more balanced team from goal keeping to attack but should be vigilant because the previous meetings between the two managers in charge go in favour of Kloop of Liverpool.

Kloop met Jose when he was at Borussia Dortmund and the Portuguese at Real Madrid including a 4-1 debacle of Madrid in the UEFA Champions League semi- finals in 2013.

Jose knows very well that a loss will not be good as their city rivals City face a relatively low ranked side, Stoke City at the Ettihad Stadium and a win for Pep’s side will see them taking sole lead on the top.