The former Head Coach of the club confirmed that he has been sacked following the appointment of new Coach Dzravko Lugarusic. Micheal is reportedly to have said at certain quarters that the new coach told the Management headed by Dr. Kwame Kyei that he, Dzravko cannot work with Micheal hence his sack. 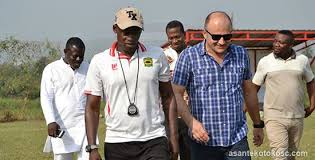 According to the Team’s official website, he has been re-assigned to the Youth team.

“Coach Michael Osei has been moved to the Youth Team of Kotoko in accordance with clause 3 (2) of his employment contract with the club. The decision was taken by Management on Monday, January 23, 2017.”

“Michael Osei until this decision was an Assistant Coach at the senior team. A letter titled: “RE-ASSIGNMENT AS TECHNICAL DIRECTOR – YOUTH TEAM and signed by Administrative Manager, Rose Padmore Yeboah, said Management expects the coach to use his “Rich experience to help develop the talents of the youth team”.

Brimah must be sacked from Stars Camp. – Jarvis Peprah