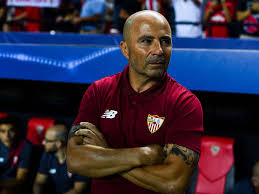 The coach of Seville no longer hides that he is the candidate chosen by the Argentine Football Association to replace the patron Bauza. And it will be announced at the end of May when it takes on the league. While he remains focused on the classification of the team to Champions began to prepare the draft with the names for his idea in the Argentina Team.

Pepe Castro, the  president of Seville, is already aware that his coach will leave with the Argentina Team. He was told by his friend, Daniel Angelici, president of Boca. And Jorge Sampaoli no longer conceals that he is the technical future of the celestial and white although his speech sounds at times enigmatic: “I know there is an interest and I know that it is said that I am the chosen one, but they will have to wait the corresponding times not to To harm anyone. To do so now would be to damage Sevilla, ” he said. And he slipped:”If a player can go by clause, why can’t a coach do same ? He said at a news conference yesterday.

But while it is focused on qualifying for the Champions League, each day allocates some of its time to shape the project with which to land in the Albiceleste.

Claudio Tapia , president of the AFA told him in telephone communication that they would let him work quietly until the end of the season. However, the coach knows that he will have little time between May 22, the day he will be announced as coach, to the first call that should be made for friendly matches against Brazil in Melbourneon June 6, and against Singapore on 13 June in that country.

And although the coach denied the meeting of his lawyer with the president of the AFA , Claudio Tapia in Barcelona , in contrast begins to diagram the project with which he will land in the Albiceleste. For this, the dialogue between his physical trainer Jorge Desio and his brother Hermes , who works in Estudiantes La Plata as coordinator of youth divisions, is frequent and will join the Argentinian National Team along with the president of the entity, Juan Sebastián Veron.

HAVE YOUR SAY: HAVE REAL MADRID AND JUVENTUS BOOKED THEIR PLACE AT THE UCL FINAL?