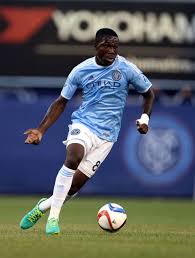 Miami FC midfielder Kwadwo Poku has been handed a late call-up to  ahead of his side’s two friendlies against USA and Mexico by Black Stars coach Kwesi Appiah.

Nhyira FM in Kumasi reports the 25-year-old will join his colleagues when they arrive in the United States on Saturday.

The former New York City midfielder has been drafted into the team due to uncertainty surrounding the availability of brothers Andre and Jordan Ayew.

Poku has been capped once by Ghana after climbing off the bench to play just eight minutes in the Black Stars 1-1 draw against Chile in an international friendly on October 10, 2015.

VINCENT ATINGA: WE ARE READY TO FACE ASANTE KOTOKO

FOOTBALL COMPETITIONS TO RESUME IN GHANA IN TWO MONTHS TIME