The 2018 FIFA World Cup qualifiers continue tonight with two of the current best players deciding their fate for the FIFA Mundial.

Cristiano Ronaldo will lead the Selecao of Portugal in a must win game against Switzerland at the Estadio da Luz in Lisbon.

Portugal have 24 points and are lying second behind Switzerland who have 27 points and lie first of Group B in the European section of the World Cup qualifiers. The Portuguese National side need to win with at least 2- 0 scoreline in order to do away with any play- offs.

With a record of 79 goals for his National team, Real Madrid talisman, Cristiano Ronaldo would be the focus of all football fans as they welcome the Swiss tonight.

Coach Fernando Santos who celebrates his birthday today would be very happy to qualify convincingly and that should be the best birthday gift for him from the first day he became a coach.

On the other side of the coin will be Barcelona’s Lionel Messi who will also lead his Argentine side to face Ecuador in Quito tonight.

Argentina have not won any of their last four matches in the FIFA World Cup and Coach Jorge Sampoli who took over from Eduardo Buaza is yet to win any competitive game since he started his new job.

The coach has promised a win but has called on all his players to give up 100 percent to complement the great efforts of team captain Leo Messi so that the Albiceleste can go to Russia.

The Argentines play in one of the difficult grounds in the CONMEBOL Region, Quito the capital of Ecuador. They have not won there in any competitive game since 2001.

Argentina lie 6th on the qualifying log with 25 points and would be very safe with any win. The draw against Peru in Buenos Aires last Thursday made things difficult for them but thanks to the win by Paraguay in Columbia, the group standings are more open than ever. Brazil are the only side to have qualified ahead of the last round of matches. Uruguay (28), Chile(26), Columbia(26) and Peru(24) all follow Brazil and are placed ahead of Argentina respectively.

Lionel Messi would be expected to exhibit his best on the night as the onus lie on him to carry Argentina on his shoulders to the FIFA Mundial 2018. The “Flea” has scored a record of 58 goals for his National team but that won’t be remembered if they fail to qualify tonight and he is aware of the challenges.

The football world cannot be denied of the greatest talents in football for the past ten years when football lovers gather in Russia 2018. Cristiano Ronaldo and Lionel Messi have won all the awards from FIFA and Ballon d’or since 2008 among themselves and so must ensure they respond to the roll call for Russia. 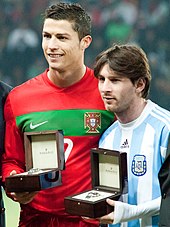 BETPAWA PREMIER LEAGUE GOES AHEAD DESPITE THREAT OF INJUNCTION

Grizemann looks into the New Year with great hope and confidence

Ghana, Egypt will be very balanced and demanding